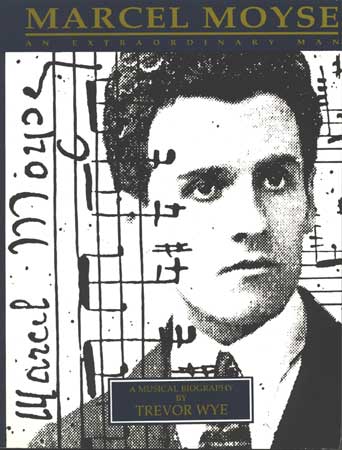 An inviting and attractive book, Marcel Moyse: An Extraordinary Man, explores the life and times of Marcel Moyse. Trevor Wye touches on the nature, character and musical philosophy of the great flutist with warmth, compassion, humour and above all, honesty.

An inviting and attractive book, Wye-Marcel Moyse An Extraordinary Man, explores the life and times of Marcel Moyse. Trevor Wye touches on the nature, character and musical philosophy of the great flutist with warmth, compassion, humour and above all, honesty.

Marcel was a French flautist who studied at the Paris Conservatory. He learned with Philippe Gaubert and Paul Taffanel, where he mastered playing in the ‘French Style’.  Moyse played principal flute in various Paris orchestras, appeared widely as a soloist and made many recordings. His trademark tone was clear, flexible, penetrating, and controlled by a fast vibrato. This was a characteristic of the ‘French style’ of flute playing that was to influence the modern standard for flautists worldwide.

Each chapter covers a facet of Moyse.  A biography of his eventful and busy life explores his most prolific moments. The teacher he became, having learned from the greatest French flautists of his time. His unique, and fantastic style as a performer, which influenced the next generation of flautists. His catalogue of world renowned study books, still used by most professionals today, are covered in depth. The book consists of six chapters, is well illustrated, includes an appendix with bibliographies, a discography, films, videos, and more.

Trevor Wye studied the flute privately both with Geoffrey Gilbert and the celebrated Marcel Moyse. He was formerly a Professor at the Guildhall School of Music, London and for 21 years at the Royal Northern College of Music in Manchester. Trevor Wye is the author of the famous Practice Books for flute. They received world wide acclaim, so Wye had them translated into eleven different languages.