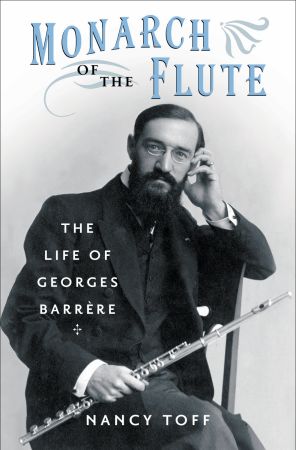 Toff – Monarch of the Flute, takes you into the mind and life of one of the most renowned flautists. Focusing on the political situation of music at the time, this hardback book is the first biography of Barrère.

Toff-Monarch of the Flute-The Life of Georges Barrere, takes you into the mind and life of one of the most renowned flautists. Focusing on the political situation of music at the time, this hardback book is the first biography of Barrère.

Georges Barrère (1876-1944) holds a pre-eminent place in the history of American flute playing. He stands best known for two landmark works dedicated to him. These include Poem of Charles Tomlinson Griffes and also Density 21.5 by Edgard Varèse.  Furthermore, being the most prominent early exemplar of the Paris Conservatoire tradition in the United States, he set new standards for American woodwind performance.

Barrère studied under Paul Taffanel at the Paris Conservatoire. By seventeen, Barrère premiered the landmark Prelude to the Afternoon of a Faun and became solo flutist of the Concerts Colonne. In addition, he founded the Societe Moderne d’Instruments a Vent, a pioneering woodwind ensemble that premiered 61 works for 40 composers in its first ten years. In 1905 he became principal flute of the New York Symphony. Whilst there, founded the woodwind department at the Institute of Musical Art (later Juilliard). His many ensembles toured the United States, building new audiences for chamber music, promoting French and American repertoire.

Toff narrates Barrère’s relationships with the finest musicians and artists of his day. This book is based on extensive archival research and oral histories in both France and the United States. It was published in conjunction with the centennial of his arrival in the United States in May 1905.

Finally, AFP products are guaranteed for a year against any defective material under normal use during the first year of purchase, and are covered by the AFP Support Plan.