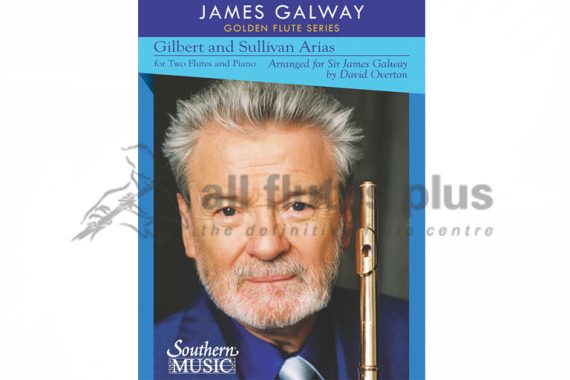 Sir James Galway first came upon Gilbert and Sullivan’s wonderful operettas while playing with Sadler’s Wells Opera orchestra, which later became English National Opera. His fondness for good tunes, with which G&S operettas abound, led to this collection, created with longtime collaborator and arranger David Overton. The Gilbert and Sullivan arrangements are divided into separate albums, as some of the songs are best suited to solo flute and piano, some for two flutes and piano, and some lend themselves to a flute choir.

Sir Arthur Sullivan (1842 – 1900) was an English composer. He is best known for his series of operatic collaborations with the dramatist W.S.Gilbert, including such enduring works as H.M.S. Pinafore, The Pirates of Penzance, Iolanthe and The Mikado. Sullivan composed 23 operas, 13 major orchestral works, eight choral works and oratorios, two ballets, incidental music to several plays, numerous hymns and other church pieces, songs and chamber pieces. The best known of his hymns and songs include “Onward Christian Soldiers” and “The Lost Chord”.