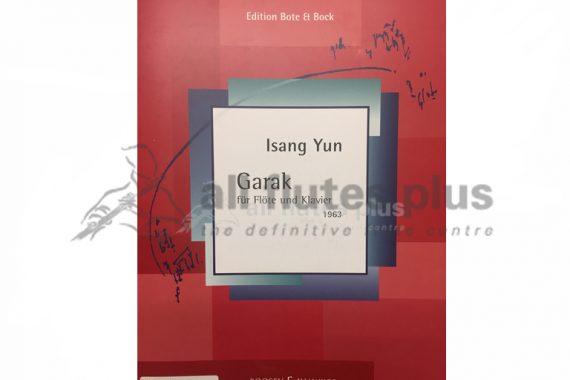 Isang Yun was born on September 17th, 1917 near Tongyong, South Korea, and received his first musical training (cello and composition) in Korea and Japan. Active opposition to the Japanese occupation resulted in his being imprisoned until the end of World War II. After gaining his freedom, he spent a period teaching music at Korean high schools und universities.

In 1956 Yun travelled to Europe to continue his studies in Paris and Berlin (with Boris Blacher), also attending the International Courses at Darmstadt. Yun became a West German citizen in 1971, and was a resident of West Berlin from 1964.

Yun was abducted from Germany by the Korean Park regime, who imprisoned him from 1967 to 1969, and his release was followed by a period of political activity on behalf of the restitution of democracy in the country of his birth.

Since his return to Germany, he taught (1969) at the Hannover State College of Music, becoming professor of composition at the State College of Arts (Hochschule der Künste) Berlin (1970-1985).

He was a member of the Hamburg and Berlin Academies of Arts, and a honorary doctor at Tübingen University and honorary member of the ISCM, also member of the Academia Scientiarum et Artium Europaea, Salzburg, among other distinctions (Großes Bundesverdienstkreuz).

This biography can be reproduced free of charge in concert programmes with the following credit: Reprinted by kind permission of Boosey & Hawkes

Categories: SHEET MUSIC, V to Z, REPERTOIRE (Fl and Pn)
Finance for your Flute
+ more
Price Promise
+ more
AFP Support Plan
+ more
Specifications Explained
+ more
Looking for Something? Speak to our Specialist Team
Give us a call :+44 (0)20 7388 8438 or email: afp@allflutesplus.com