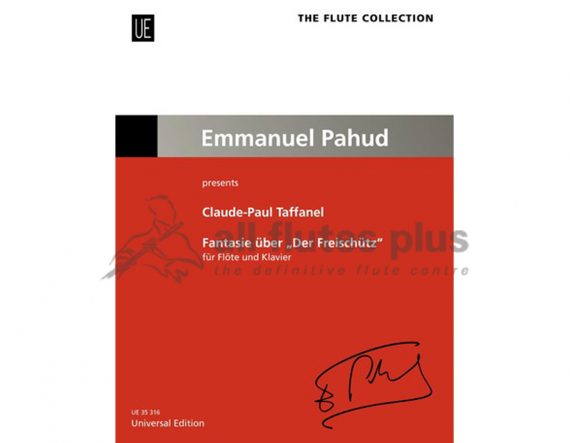 Taffanel Fantasie uber Der Freischutz-Flute and Piano-Universal Edition utilizes themes from C. M. von Weber’s opera, and turns it into a beautiful fantasie for flue and piano. This piece shows off the lyrical and virtuosic playing of the performer.

Taffanel Fantasie uber Der Freischutz utilizes themes from C. M. von Weber’s opera, and turns it into a beautiful fantasie for flue and piano. This piece shows off the lyrical and virtuosic playing of the performer.

This publication is part of The Flute Collection, which brings together a range of selected pieces from the international concert life of famous flautists.  Not to mention, it’s Curated by internationally acclaimed flautist Emmanuel Pahud.

Der Freischütz is a German opera with spoken dialogue in three acts. It premiered on 18 June 1821 at the Schauspielhaus Berlin. Based on the German folk legend of the Freischütz, Der Freischütz is considered the first important German Romantic opera.

Taffanel studied at the Paris Conservatoire with Louis Dorus, graduating in 1860. When Taffanel became Professor of Flute at the Conservatoire, in 1893, he revised the institute’s repertoire and teaching methods.  Taffanel’s pupils learned to play in a new, smoother style that included a light and carefully-modulated vibrato.  People still swear by his study books and perform his flute repertoire.  Jack of all trades, Taffanel also conducted the Paris Opera and The Société des Concerts du Conservatoire.

SKU: SKU20228. Categories: REPERTOIRE (Fl and Pn), S to U, SHEET MUSIC
Finance for your Flute
+ more
Price Promise
+ more
AFP Support Plan
+ more
Specifications Explained
+ more
Looking for Something? Speak to our Specialist Team
Give us a call :+44 (0)20 7388 8438 or Email: afp@allflutesplus.com