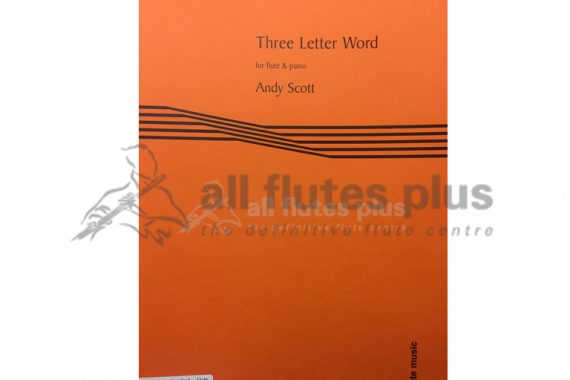 Three Letter Word was commissioned by the Park Lane Group for performance in the PLG Young Artists New Year Series in the Purcell Room, Southbank Centre, London in January 2010 and originally scored for Saxophone & Piano. The composer has specifically undertaken an arrangement for Flute & Piano for Paul Edmund-Davies.
Recorded by Paul Edmund-Davies & Peter Lawson on the CD The Bad Tempered Flute – The Flute Music of Andy Scott (Nimbus Alliance NI 6156), and premiered by Paul Edmund-Davies & Gabriel Sanchez at the National Flute Association Convention 2011 in Charlotte, USA in August 2011.
Three Letter Word is dedicated to the music and memory of the Swedish composer and pianist Esbjorn Svensson, who was tragically killed in a diving accident on 14 June 2008, aged only 44 years.

Andy Scott writes “I was fortunate enough to hear Esbjorn Svensson in concert at the IAJE Conference in New York City in January 2006, where I was also performing with duo partner, percussionist Dave Hassell. In the afternoon he practised for two hours, playing classical music, and in the evening his trio, E.S.T., produced an amazing show of virtuosity and creativity, coupling inventive compositions with daring improvisations within very individual sound worlds.

In terms of writing this piece I have taken two sound worlds: one is rhythmically free with virtuosic flute lines and an underlying tremolo based around four notes from the piano, the second is based around a two-bar piano riff over which the flute explores different musical possibilities. Both these ideas return in different guises before a solo piano chorale precedes a final section. Hidden in the piece is a short melodic quote from Dolores in a Shoestand from the E.S.T. album Tuesday Wonderland (2006).

The title of the piece, Three Letter Word, came about from coincidence of names or phrases that may be abbreviated: Esbjorn Svensson’s group, the commissioning body, the performers, and maybe most importantly given the dedicatee, the words ‘rest in peace’.”

Categories: SHEET MUSIC, S to U, REPERTOIRE (Fl and Pn)
Finance for your Flute
+ more
Price Promise
+ more
AFP Support Plan
+ more
Specifications Explained
+ more
Looking for Something? Speak to our Specialist Team
Give us a call :+44 (0)20 7388 8438 or email: afp@allflutesplus.com