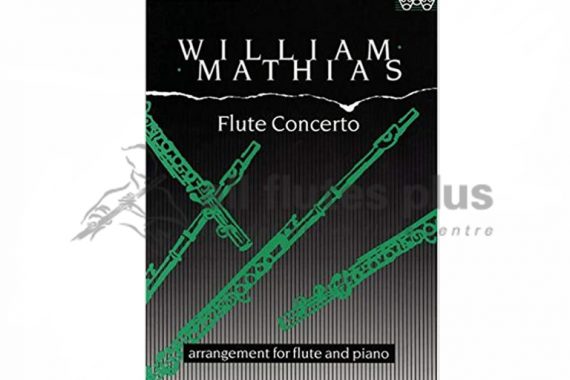 This commission gave me the happy opportunity of writing a concerto for William Bennett, to whom the work is dedicated. It is also a pleasure that his colleagues in this first performance will be the Guildhall Strings.

The work’s three movements are strongly contrasted, and each may be thought to encapsulate an aspect of the flute as a musical instrument. Movement 1 draws on the flute’s capacity for gracefulness and poise heard here not least in sinuous melodic lines. In severe contrast, Movement 2 is a study in far more intense and even tragic emotions – its jagged opening idea is marked `molto marcato’. The Concerto’s rhythmic and bustling finale highlights the flute’s capacity for display; the movement begins happily, and the spirit of play develops towards a hectic coda.
© William Mathias

William Mathias (1934-1992) was born in Whitland, Dyfed. He studied at the University College of Wales, and subsequently at the Royal Academy of Music. From 1970-1988 he was Head of the Music Department at the University College of North Wales, Bangor. Mathias musical language embraced both instrumental and vocal forms with equal success, and he addressed a large and varied audience both in Britain and abroad. He was also known as a conductor and pianist, and gave or directed many premières of his own works. He was made CBE in the 1985 New Year’s Honours. In 1992, the year of his death, Nimbus Records embarked upon a series of recordings of his major works.