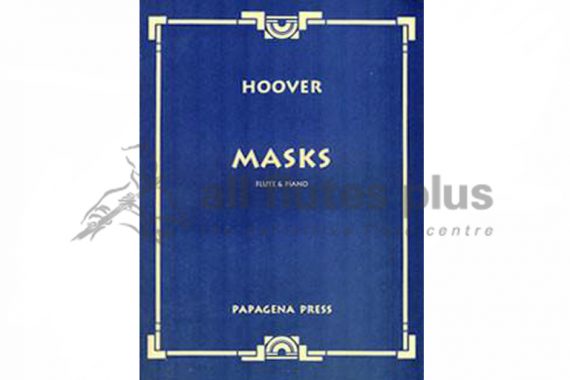 ” When asked to write a piece for the National Flute Convention in Phoenix, I envisioned a piece comprising several short movements. The idea of MASKS appealed to me, for a mask generally makes an impression quickly; its affect clear at a glance.

I have collected several masks over the years, and looked at many more in museums and art books of various kinds. Three of these movements reflect particular masks that I have seen, one is a generic type, and two are waiting to be constructed.

The three specific masks are: I A Haida (Northwest Native American) mask, of commanding presence; II a Huichol (Mexican Native) Jaguar mask, completely beaded with intricate flower patterns; and III, an African American death mask of great calmness. IV is a clown mask, and the last two are left entirely to your imagination.”  Katherine Hoover