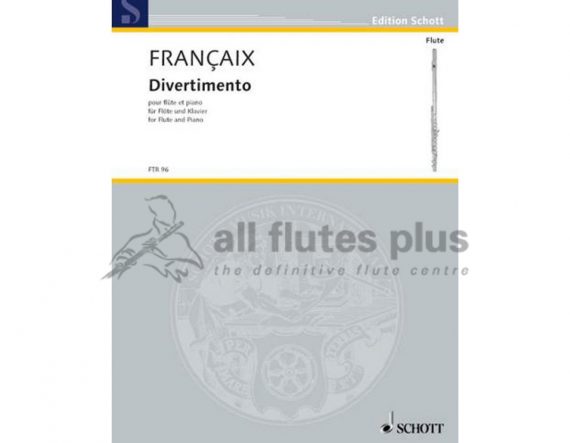 Jean Françaix was born on 23.5.1912 in Le Mans in France. He received his first music lessons at home: his father was a composer and pianist and also director of the Conservatoire and his mother a singing teacher and the founder of a renowned choir. In 1922 at the age of only 10, Françaix received his first tuition in harmony and later also counterpoint from Nadia Boulanger. The young composer wrote his first composition the very same year: a piano piece entitled “Pour Jacqueline”, dedicated to a cousin, which was printed two years later. Encouraged by Maurice Ravel, he continued his studies at the Paris Conservatoire. Alongside his compositional training, Françaix embarked on a career as concert pianist. At the age of 18, he received the first prize in the piano class of Isidore Philipp. Two years later, he represented the young French school of composition together with Claude Delvincourt at the international music festival in Vienna where his Huit Bagatelles were performed.

Jean Françaix achieved international success in 1936 with the first performance of his Concertino for piano and orchestra at the chamber music festival in Baden-Baden. During the ensuing years, the composer extended his oeuvre with numerous works in a wide range of genres including operas, ballets, orchestral works and also solo concertos, film music and vocal works. The composer also focused intensively on chamber music. Françaix taught at the Ecole Normale de Musique in Paris from 1959 to 1962. He participated actively in concert life, frequently together with his daughter Claude as partner at the piano, right up to shortly before his death on 25.9.1997 in Paris.

Despite close contacts with Francis Poulenc and the “Groupe des Six” and a predilection for French Impressionism and the Neoclassicism of Stravinsky, Jean Françaix never felt committed to any particular musical ideology. The foundations of his tonal, melodically elegant and rhythmically incisive style were laid at an early stage. In contrast to the avant-gardists of his generation, Françaix did not question the traditional listening habits of his public as a matter of principle. In his instrumental music, he displayed a particular interest for wind instruments. Chamber works such as the Petit Quatuor pour saxophones (1935), Quintette à vents No. 1 (1948) and Tema con variazioni (1974) for clarinet and piano were adopted into the regular repertoire just as the solo concerto for oboe L’Horloge de Flore (1959) and the Concerto for clarinet and orchestra from 1967.

In addition to five operas and sixteen ballets – including A la Françaix which was premiered in 1950 by the New York City Ballet – the oratorio L’Apocalypse selon Saint Jean can be considered a major work from the composer’s extensive oeuvre. This composition, completed in 1939 and classified as an “oratorio fantastique”, demands four soloists, mixed choir and two orchestras. Despite the large-scale forces, Françaix avoids all forms of monumental pathos in his interpretation of the Apocalypse of St John in the New Testament – the music is characterised by deeply felt ardency and meditative strength.