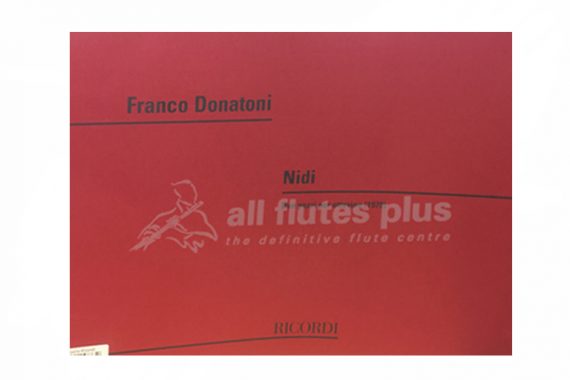 Franco Donatoni was born in Verona on 9th June 1927. He began to study music at the city’s music high school under the guidance of Piero Bottagisio and later went on to study composition at the G. Verdi Conservatory in Milan under Ettore Desderi and at the G. B. Martini Conservatory in Bologna under Lino Liviabella. He obtained a diploma in composition and orchestration for bands in 1949, another diploma in choral music in 1950 and a third diploma in composition in 1951.In 1953 he obtained a diploma in the advanced course in composition taught by Ildebrando Pizzetti at the Accademia Nazionale di S. Cecilia in Rome. He attended the Ferienkurse in Darmstadt in 1954, 1956, 1958 and 1961.

His works have been published by Zanibon, Schott Music in London, Boosey & Hawkes in London, Suvini Zerboni in Milan (1958-1977) and Ricordi in Milan (since 1977).

Donatoni taught in the Bologna, Turin and Milan conservatories from 1953 to 1978. He also held the chair of advanced composition at the Accademia Nazionale di S. Cecilia in Rome. From 1970 to 1999 he taught the advanced composition course at the Accademia Chigiana in Siena. From 1971 to 1985 he conducted courses within the context of the art and performing arts degree course (DAMS) in the Faculty of Letters at the University of Bologna.

In 1972 he was invited by the Deutscher Akademischer Austauschdienst to serve as composer in residence in Berlin for a year. In 1979 he was invited to hold a seminar on his work at the University of California in Berkeley. He held various other seminars in Switzerland, France, Spain, Holland and Israel. He taught at the Scuola Civica in Milan, the Accademia Perosi in Biella and the Accademia Forlanini in Brescia. His writings include Questo (Adelphi, Milan, 1970), Antecedente X (Adelphi, Milan, 1980), Il sigaro di Armando (Spirali Edizioni, Milan, 1982) and In-oltre (Edizioni L’Obliquo, Brescia, 1988).

In 1985 he was awarded the title “Commandeur dans l’Ordre des Arts et des Lettres” by the French Minister for Culture. In 1990 the Settembre Musica festival in Turin dedicated an extensive monographic programme to him. In 1991 he was invited to Australia by the Elision Ensemble to hold a series of seminars at the Italian Cultural Institute in Melbourne. In the course of this trip the world premiere of Refrain II was performed. From June to October 1992 the Milano Musica concert series realised an important series of concerts in his honour; the 8 concerts featured a number of his most important compositions including the world premieres of Feria II for organ and the first part of Bach’s The Art of the Fugue (Counterpoints I-VII) transcribed by Donatoni for orchestra (the second part, Counterpoints VIII-XIV, was performed posthumously by the Orchestra Nazionale della Rai in Turin in November 2000).

Of the compositions written in the decade ’90-’99 mention must be made of Sweet Basil for trombone and big band (1993), commissioned by the French Ministry for Culture and Communications, Portal for bass clarinet, clarinet in B flat, E flat clarinet and orchestra (1995), on commission from Radio France, In Cauda II (1996), on commission from the Süddeutscher Rundfunk Stuttgart, and In Cauda III (1996). Still in 1996 he completed the cycle (begun in 1983) of the Françoise Variationen for piano. In September 1998, at the Music Festival in Strasbourg, his short comic opera Alfred, Alfred was performed.