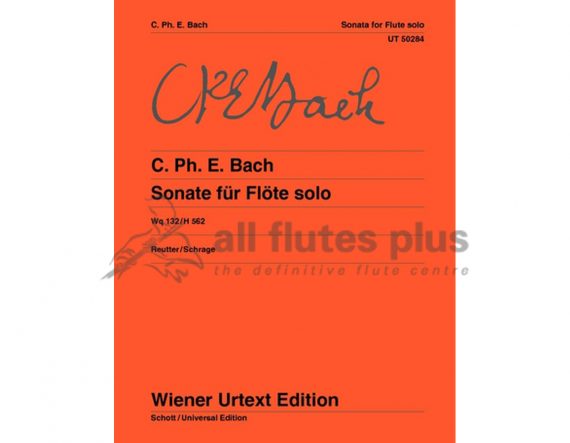 Carl Philipp Emanuel Bach’s Sonata in A minor for solo flute quasi constitutes a counterpart to the partita of his father Johann Sebastian in the same key. Created in 1747, but unpublished until 1763, it heralds the sentimental style of a new era, compared to the ca. 30 years older work of his father. The edition is based on the first edition which is hidden among piano works by C. Ph. E. Bach and other composers in the anthology Musikalisches Mancherley. A separate edition, also published in 1763, proved to be an offspring of the first edition with identical musical text and could be eliminated as source for the edition. But the edition was also based on a late 18th-century copy from the Giedde Collection in Copenhagen which is of great significance to the flute literature. Although it also seems to go back to the first edition, it nevertheless turns out to be a contemporary corrective to deficiencies of the first edition in some passages. The practical performance notes of the Kuijken pupil Susanne Schrage not only come close to the musical text by means of the flute method of Bach’s Berlin fellow composer Johann Joachim Quantz, but also analyse relevant chapters of Versuch über die wahre Art, das Clavier zu spielen by C. Ph. E. Bach himself, thus providing interpretational aids right from the composer’s perspective.
German classical composer and musician, Carl Philipp Emanuel Bach (1714-1788) was the fifth child and second (surviving) son of Johann Sebastian Bach and Maria Barbara Bach.