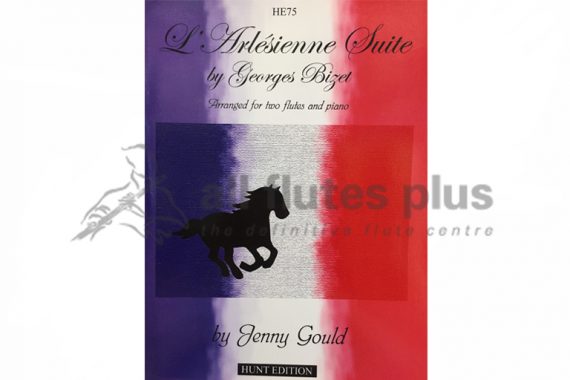 Two flutes with piano accompaniment. L’Arlésienne literally means ‘the girl from Arles’. This character is the same ‘type’ as the more well-known figure of Carmen, and the play by Alphonse Daudet for which Bizet wrote the incidental music suffered from the same intensely negative reaction as Carmen did when it premièred three years later. The plots of the two stories deal with similar themes – in L’Arlésienne the young man is in love with the ‘femme fatale,’ from Arles, when he is supposed to be marrying the good, innocent girl-next-door type from his own village. The story is set in Provence, and some of the melodies used are traditional, but given Bizet’s own very special treatment and orchestration.

Despite the play only running for 21 performances, Bizet realized the intrinsic value of the music as it stood, so after the play had closed he compiled the first orchestral suite. This proved to be so popular that Bizet’s friend Ernest Guiraud later put together the second suite, both of which are now concert hall favourites.

This album contains extracts from both suites, using material from the Prélude, Adagietto, Pastorale and Carillon.

Georges Bizet was a French composer, mainly of operas. He was one of the most gifted musicians of the 19th century, best known for his operas in a career cut short by his early death.  Bizet achieved few successes before his final work, Carmen, which has become one of the most popular and frequently performed works in the entire opera repertoire.