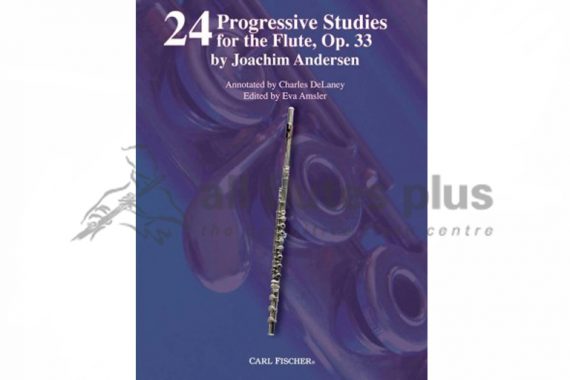 Carl Fischer Music presents a new spin on a classic teaching method with this edition of Joachim Andersen’s 24 Progressive Studies for the Flute, Op. 33. While all of the original etudes are included, flute pedagogue Professor Charles DeLaney has expanded them to include notes in the upper range of the instrument, updating this book for the flute’s modern incarnation. DeLaney also lends his sharp wit to this edition, having cleverly named the etudes and also has provided helpful and humorous practice notes for each. As a special bonus, this book also features “DeLaney’s Daily Dozen,” a set of practice exercises guaranteed to improve technique and musicality. Essentially a complete method built on a proven collection of etudes, Delaney’s edition of 24 Progressive Studies for the Flute, Op. 33 is absolutely essential for serious flute students. For intermediate to advanced players.

From 1869-1878, he played for the Royal Danish Orchestra. He then moved to St Petersburg and joined the St. Petersburg Philharmonic Orchestra. In 1881, he moved to Berlin where he performed as flautist in the Royal German Opera. Whilst in Berlin, he became a co-founder and member of the Berlin Philharmonic

His compositional output consists of 67 opuses mainly for the flute.