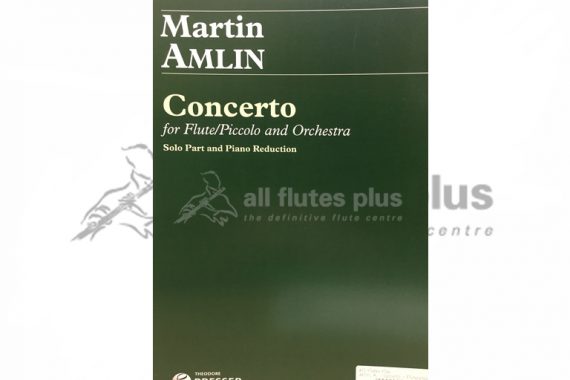 Martin Amlin’s effervescent Concerto for Flute/Piccolo and Orchestra was composed for Linda Toote to perform (as soloist doubling Flute and Piccolo) at the 2012 convention of the National Flute Association. Set as one continuous fast, slow, fast movement, the concerto is inspired by Amlin’s fascination with rhythm, providing an intriguing study in irregular and illusory groupings within a steady time signature.

Much of his music is characterized by a pungent tonality and energetic rhythms. Sonata for Piccolo and Piano and Sonata No. 2 for Flute and Piano have each won the National Flute Association’s Newly Published Music Competition. Concerto for Piccolo and Orchestra was premiered by the Atlanta Symphony Orchestra, and he has had performances of his music by the Pro Arte Chamber Orchestra, the Tanglewood Festival Chorus, the John Oliver Chorale, the Back Bay Chorale, the Webster Trio, and the American Vocal Arts Quintet. He has had commissions from the Seattle Flute Society, Pacific Serenades, the Chicago Flute Club, ALEA III, the James Pappoutsakis memorial flute competition, pianist Andrew Willis, and clarinetist Michael Webster.

Martin Amlin is Chairman of the Department of Composition and Theory at Boston University and Director of the Young Artists Composition Program at the Boston University Tanglewood Institute. He is also recipient of Boston University’s Kahn Award for his Piano Sonata No. 7. He studied with Nadia Boulanger at the Ecoles d’Art Américaines in Fontainebleau and the Ecole Normale de Musique in Paris, and received masters and doctoral degrees as well as the Performer’s Certificate from the Eastman School of Music. Mr. Amlin has appeared as soloist with the Boston Pops Orchestra in performances of Mendelssohn’s Piano Concerto No. 1 and Gershwin’s Rhapsody in Blue, and has performed on the Boston Symphony Orchestra’s Prelude concerts at both Symphony Hall and Tanglewood. He has also appeared on the FleetBoston Celebrity Series and has been pianist for the M.I.T. Experimental Music Studio and the New England Ragtime Ensemble. He has often been heard live on Boston’s WGBH radio station as both performer and composer, and has given the world premiere of many new pieces.

Categories: A to C, PICCOLO MUSIC, REPERTOIRE (Fl and Pn), SHEET MUSIC
Finance for your Flute
+ more
Price Promise
+ more
AFP Support Plan
+ more
Specifications Explained
+ more
Looking for Something? Speak to our Specialist Team
Give us a call :+44 (0)20 7388 8438 or Email: afp@allflutesplus.com