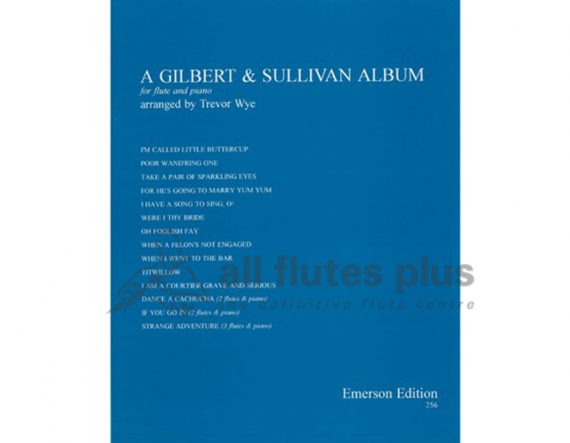 Sir Arthur Sullivan (1842 – 1900) was an English composer. He is best known for his series of operatic collaborations with the dramatist W.S.Gilbert, including such enduring works as H.M.S. Pinafore, The Pirates of Penzance, Iolanthe and The Mikado. Sullivan composed 23 operas, 13 major orchestral works, eight choral works and oratorios, two ballets, incidental music to several plays, numerous hymns and other church pieces, songs and chamber pieces. The best known of his hymns and songs include “Onward Christian Soldiers” and “The Lost Chord”.

Categories: ALBUMS, ENSEMBLE MUSIC, Flute Ensemble - Duos-Trios-Quartets-Choir - with or without piano, Flute Trio, G to J, Intermediate and Advanced Classical, REPERTOIRE (Fl and Pn), S to U, SHEET MUSIC
Finance for your Flute
+ more
Price Promise
+ more
AFP Support Plan
+ more
Specifications Explained
+ more
Looking for Something? Speak to our Specialist Team
Give us a call :+44 (0)20 7388 8438 or Email: afp@allflutesplus.com