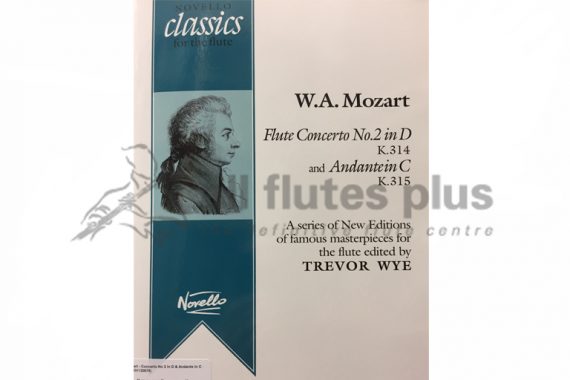 The Flute Concerto in D, and the Andante in C, written by Mozart in 1778, are two of the most popular works for the flute. This new edition, edited by Trevor Wye follows earliest known sources, and the flute part is considered an authoritative Urtext edition. Detailed performance suggestions are included, with particular guidance to the ornaments and cadenzas.

Trevor Wye studied the flute privately both with Geoffrey Gilbert and the celebrated Marcel Moyse. He was formerly a Professor at the Guildhall School of Music, London and for 21 years at the Royal Northern College of Music in Manchester. Trevor Wye is the author of the famous Practice Books for flute. They received world wide acclaim, so Wye had them translated into eleven different languages.

Categories: SHEET MUSIC, K to M, REPERTOIRE (Fl and Pn)
Finance for your Flute
+ more
Price Promise
+ more
AFP Support Plan
+ more
Specifications Explained
+ more
Looking for Something? Speak to our Specialist Team
Give us a call :+44 (0)20 7388 8438 or email: afp@allflutesplus.com