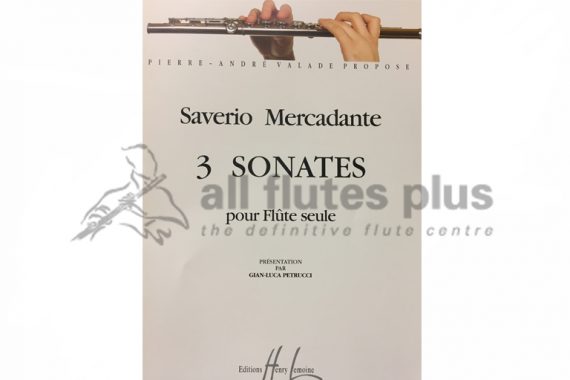 Biography (by Editions Henry Lemoine)
The composer Saverio Mercadante (b Altamura, 1795, d Naples, 1870) can today be regarded as one of the most important musicians of the 18tb century, thanks to the latest research on the part of a number of musicologists. During his lifetime he owed his greatest success to his operas, but there is now a growing interest in his immense instrumental output which was almost ignored by his contemporaries. When one examines his various symphonic works, concertos, songs with piano and dances, it is not hard to see why in his day be was considered the equal of Rossini, Bellini and Donizetti, praised by such famous musicians as Franz Liszt and even earned the admiration of such a severe critic as Giuseppe Verdi.

Mercadante was trained in the Neapolitan school, where all symphonic writing was based on composition for a solo instrument, and after his studies he continued to write for a wide variety of ensembles, unlike his fellow composers Rossini, Bellini and Donizetti. His musical language is lyrical jet bears the mark of instrumental exuberance, and performers such as Giosuè Fiore, Pasquale Bongiorno, Giovanni Battista Belpasso and Emanuele Krakamp continued the instrumental tradition, during a century better known for its love of opera, by giving concerts of his works in Naples.

The three Sonatas for Solo Flute demonstrate his interest in the (lute and his research into its capabilities. The first sonata in E minor also exists in two other versions, one with piano accompaniment, and the other for two violins and cello. The two other sonatas were mistakenly attributed to the flautist Giosuè Fiore (? -1823, Naples) until the original autograph manuscript of the three sonatas was rediscovered in a private library, and so enabled the correct authorship to be established. By 1862 Saverio Mercadante was completely blind, be died in Naples on 17 December 1870, having dictated his last composition, a lyrical and expressive Serenade for cello and piano, on 11 November.