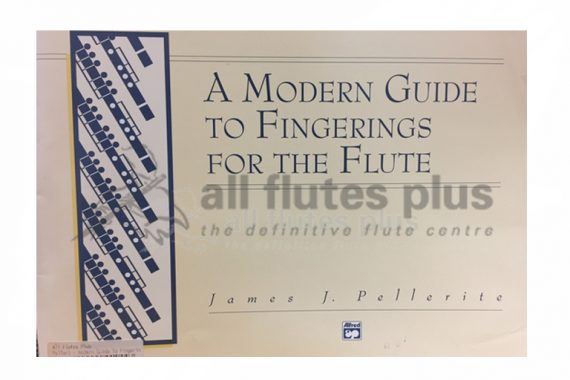 One of the most complete guides for the flute ever published! Covers basic fingerings, trills, tremolos (3rds through octaves), quarter-tones, multiphonics. A unique reference book for studio and classroom by James J. Pellerite, Professor of Flute, Indiana University.

As a performer on the modern flute, Mr. Pellerite is well-known as an orchestral musician. He succeeded his renowned teacher, William Kincaid, as solo flutist of the Philadelphia Orchestra. He has held the position of principal flute also with the symphony orchestras of Detroit and Indianpolis and performed with orchestras of Chautauqua (NY), Radio City Music Hall (NYC), Orquestra Sinfonica de Puerto Rico, as well, the San Francisco Symphony, Dallas Symphony and the Minnesota Orchestra. His performances have included those under such eminent conductors as Leonard Bernstein, Pablo Casals, Neville Mariner, Dimitri Mitropoulos, Eugene Ormandy, Leopold Stokowski and Igor Stravinsky.

For many years he served as Professor of Flute at Indiana University, and many of his students now hold prominent university and symphony positions. During much of his career as a classical flutist and artist teacher he has appeared throughout the U.S., Canada, Mexico and abroad. Numerous residencies have included tours to Australia, Japan, Taiwan, Singapore and People’s Republic of China.